The pursuit of a better economic development model and lower carbon dioxide emissions in today's society has prompted the automotive electronics market to move toward a path that is completely different from previous development trajectories. Over the past few decades, the electrical load of automotive systems has evolved from simple lighting and charging to engine management and control, sensors and safety, and of course entertainment, making cars smarter and more complex.

This article refers to the address: http://

Traditionally, high-voltage, high-capacitance capacitors are typically implemented by electrolytic capacitors or thin film capacitors, which are generally large in size. Despite years of development, the miniaturization of capacitors with high withstand voltage and high capacity is still very limited. The current progress is mainly in the high withstand voltage, but it is difficult to achieve high capacity at the same time; or to achieve high capacity but the voltage is generally less than 50V, obviously, this can not meet the application needs of the automotive electronics market.

In order to obtain both high withstand voltage and high capacity, it is common practice in the industry to stack multiple ceramic capacitors according to the specifications of DSCC 87106/88011 and MIL-PRF-49470, which takes up a large space and is heavy, and the price expensive. Therefore, there has been a demand in the industry for a lighter, smaller, high withstand voltage, high capacity capacitor.

The failure mode of ceramic capacitors determines the design limitations, and the existence of multiple failure modes also limits the capacitance of medium and high voltage capacitors.

Some failure modes are external, such as mechanical stress or thermal stress, but at the same time we need to delve into the inherent failure mode, which is within the control of the manufacturer.

The design constraints of multilayer ceramic capacitors vary from generation to generation. The main limiting factors for early multilayer ceramic capacitors are the point defects and impurities of the dielectric material itself, which affect the quality and purity of the material, as shown in Figure 1, which limits the upper limit of the number of layers inside the capacitor and the minimum thickness of each layer. value. 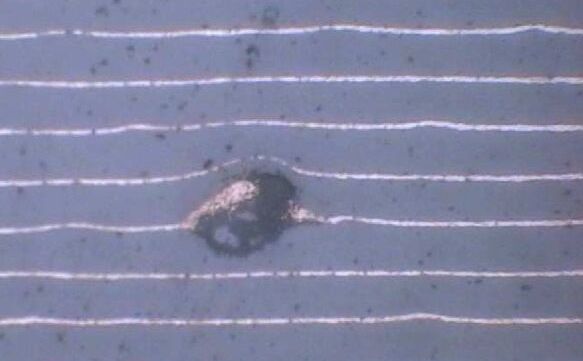 However, a new failure mode has emerged, which we call piezoelectric stress fracture, usually referred to as piezoelectric effect or electro-deformation phenomenon, as shown in Figure 4. This failure mode has so far been a limiting factor in the manufacture of multilayer ceramic capacitors. It affects most of the barium titanate class II (Class II media, and limits the capacitance range of ceramic capacitors with a voltage above 1210 and withstand voltage above 200V).

As shown in Figure 3, the fracture typically runs through the middle of the entire capacitor along one or two dielectric layers. Most of the solutions are to add multiple capacitors by adding pins to increase the capacitance at a given size, but this requires a lot of manpower, cost, and reliability issues. Another solution uses a special dielectric formulation, but at the expense of the dielectric constant and affects the resulting capacitance.

As shown in Figure 5, StackiCap is a solution for chip ceramic capacitors that meet the limitations of piezoelectric failure. Its patented technology, GB Pat./EP2013/061918, innovatively incorporates a layer of pressure buffer inside the capacitor, allowing the capacitor to exhibit multiple stacked capacitors while providing a single manufacturing and processing flow. The advantages of capacitors.

The pressure buffer layer uses a ready-made combination of material systems and undergoes a standard manufacturing process. The pressure buffer layer is applied to one or more locations where the mechanical stress is greatest, thereby alleviating the mechanical stress caused by the piezoelectric deformation. According to the experiments so far, the pressure buffer layer can divide the multilayer capacitor into 2, 3 or 4 segments inside, which greatly alleviates the mechanical stress caused by the internal deformation, and at the same time releases the machinery on the end through the FlexiCap flexible end technology. Stress, so that we don't need to stack multiple capacitors, we don't need to assemble the capacitors to facilitate standard tape and reel packaging and automated placement.

While dramatically increasing the capacitance, StackiCap enables a significant reduction in component size. The following image is a visual representation of the superiority of StackiCap.

(3) Bending test. The StackiCap series capacitors were mounted on the Syfer/Knowles test PCB for bending test to evaluate the mechanical properties of the components.